Alright, so I told you I’d post some pictures of my Titanic oldies but goodies. I’ll post my absoulte favorite today and maybe some more a little later.

Oh, and I should preface this post by saying my books are rare, but not that rare. They’re not worth much, if anything at all. They’re simply valuable to me. I’ve researched all things Titanic since I was 10 years old. (My obsession has absolutely nothing to do with the movie fyi, although it was great.) I’m intrigued by all the tiny details that went into the building of the ship and the subsequent failure of its structure. That’s it. 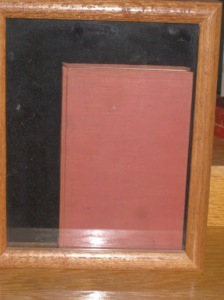 Without further ado, I’d like to introduce my baby. The book I searched out for YEARS. I mean YEARS, people. I scanned antique shops, old bookstores up and down California looking for this one. It’s a 1912 edition called “The Wreck of the Titan or Futility.” You may be thinking to yourself, “But it’s not about the Titanic, so why would she care so much about this one in particular?”

In 1898, Morgan Robertson published a little novella about a triple screw steamer, 800 ft. long, rumored to be “unsinkable”, traveling at 25 knots, that struck an iceberg in the North Atlantic and sank losing nearly all passengers due to low numbers of life boats.

Wait a minute. Did you hear what I said? This was a novella. Fiction, people, fiction. And it was published in 1898, a full fourteen years before the Titanic sank.

I’d L-O-V-E to get my hands on that 1898 novella. But I can’t find one for the life of me. So I settled for second best. After the Titanic’s sinking, certain publishers realized the comparisions between the novella and the grim reality, and republished it the year of the tragedy: 1912. That’s the copy I have. They also republished it in 1991…and I have that copy too although it’s not nearly as special to me.

That’s why I love old books so much. That little red book slumped in the corner of a glass case may not look like much perched on a shelf with other, newer, more sparkly books. But inside, deep within its pages, lies a mystery. And to me, it’s one of the greatest mysteries of life.

How could a man predict what would happen that fateful night of April 14th, 1912 with such haunting accuracy? How was it revealed to him? And how did we let such a horrible tragedy occur knowing all we did? Alright, I could go on and on…perhaps I will in April when the 98 year anniversary of the sinking rolls around. For now, I have to get back to editing my work-in-progress.

Hope you have a great week! Oh! And if you happen to come across that 1898 version, feel free to mail it to me! LOL