Today I was a busy, busy bee. I woke up, gulped down some coffee, took off to my niece’s soccer game (where she scored two goals–such a proud auntie sitting right here), then I came home, put my kids down for naps, pumped out a page on my WIP (not much but hey, it’s forward progress), then went to a three year old’s birthday party.

Now I’m beat. I mean dragged down and out, beat. I’m sitting at my computer, dreading the chapter I have yet to write…and it’s a good one, let me tell you. Okay, I won’t tell you much other than I’m coming down to the “main event”. The thing that’s gonna bring the whole vampire coven to its knees. Yeah, gonna be good. But tonight I just don’t feel up for it.

Sounds sad but I think tomorrow morning I’m going to go to church…so I can stop by Starbucks on the way there…and praise God of course. Of course that comes first… 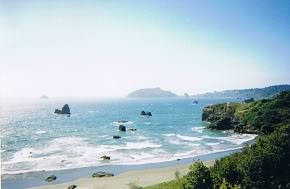 Me and the FamBam almost took off to Humboldt this afternoon. It was so tempting even with the 6 hour drive and two tired kids. That right there should tell you how bad my withdrawals are for that place. (And I know the way that sounded, but I don’t crave Humboldt for the green. I’m not interested in the least–never have been. It’s the welcoming, zero-stress atmosphere that’s so alluring.) I mean look at how beautiful it is? How could I resist? It was three o’ clock in the afternoon and The Husband said, “If you tell me we can go to Humboldt it’s on. Let’s roll right now.”

My mind raced: We’d get there by ten at night. The kids are exhausted from a busy day. I think Tank is getting sick. He wouldn’t sleep well. We don’t have reservations and our friends that live there aren’t expecting us. But I could take the head shots I’ve been planning and they’d be BEAUTIFUL up there. I miss it so much and haven’t been back in years. The kids have never seen where I went to college. (Go Lumberjacks!) But, oh, the packing, unpacking, driving, etc. And then my brain exploded. No really, that’s how it felt.

I don’t know what happened to my spontaneity. I used to love travelling somewhere unexpected at the last moment. One time after an afternoon full of college classes The Husband (who was The Boyfriend at the time), parked his truck at his house, sat for a second before saying, “Wanna go to the beach?” It was 2 hours away. Smiling ear to ear, I said, “Sure!” And away we went for the day. The sunshine was brighter. The waves crashed louder. Something about the way we surprised the hell out of that pre-planned day made it all the better. I loved it down to the tips of my toes.

I think that kind of freedom was dropped somewhere along the way. Pieces of it are probably floating around in the old crib and stuffed in the creases of a worn diaper bag. I’m sure Tank and Princess drank some of that freedom away in their formula and chewed on it in one hand while holding their binkies in the other. Ah, well. Maybe someday I’ll gather it all back.

Needless to say, we’re not going to Humboldt. It’d take too much work, too much planning, and I’m just too tired. But hey, sugary-goodness coffee is calling tomorrow. And for that I’ll get up early. Amen.