Oh, Bachelorette, how I don’t envy thee. I’m going to write a Bachelorette re-do Pararomance Style because, well, because it’s damn fun to poke fingers at people who put themselves on shameless reality tv “to find true love”. On to the set-up…

After being on last season of The Bachelor, in which Ali turned down a chance at love for work, wait…isn’t that the point of the show? To find love? To leave your life behind in hopes of joining his? Poor, confused girl must’ve discovered she was simply in desperate need of a vacation.

Anyway, Ali is now the star of her own show The Bachelorette. A dizzying number of guys came onto the show looking for their ten minutes of fame and love. (That’s the right order, let’s be honest.) She’s now down to four guys and is about to go to their hometowns and meet their families. I could write a hilarious ending for the final four who are her actual picks but where’s the fun in that? Some of those guys *ahem*Kirk*choke*cough…pardon me, I had a really boring bug in my throat…like I was saying, some of those guys are too flat–er, nice. Yeah, they’re too nice to throw under the bus. Here are my picks for the spoof date:

Rated Rude Justin Rego has to be there because he couldn’t further his career as a soap opera wrestler, uh, I mean as a pro entertainment wrestler, if he doesn’t get air time.

Wimpy Weatherman Jonathan needs be be involved in case the outlook on the date changes from lame to stormy with chance of meatballs. 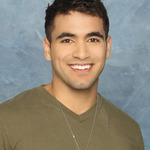 Rico Suave Roberto is nice to look at and he’s just as smooth pitching on the baseball field as he is swinging through the air at Broadway’s Lion King.

Krazy Kacey has to make an appearance because, let’s face it, Ali needs someone who can guard and protect her heart. And she couldn’t do that without a stranger offering his wrist to tattoo.

Their date should take place somewhere dangerous to make my story more interesting…an erupting volcano! No, wait, the producers beat me to it. How about a glacier in a ice/sleet/wind storm! Nope, beat me to it again. Damn, they’re into torture too. Okay, okay, how about on top of a tiny platform on the Golden Gate Bridge in San Francisco? Yeah, that’s out of left field…sounds about right.

It’s dark and windy as Wimpy Weatherman Jonathan and Ali climb the final staircase to the bridge’s platform, the other men trail behind carrying the dinner setup like trail donkeys.

Jonathan: It’s dark and windy, Ali, you should take my hand.
Ali: (takes hand) Thank you. Look at the view from up here. The city lights are beautiful.
Jonathan: Yeah, and the low pressure system moving in is stunning too.
Ali: (looks at him bug-eyed) What were your parents like? Do you have any siblings? Where do you live? What will I see in your hometown? Will your parents like me?
Jonathan: (trips on final stair after realizing he hasn’t asked a single question about her in 3 weeks) I’m not so comfortable without my blue screen so you’ll have to excuse my nerves.
Ali: That’s all right, I learned all about your nerves the date of the swimsuit calendar. That ducky wraparound floatie looked great on you.
Jonathan: Thanks. There’s something to be said about a man who gets into the water with caution.

(Ali, bored out of her wits, leans over rail to gaze at sharks circling beneath them, looses footing just as Kacey skids to her side and braces her around the middle.)

Kacey: (in a Kermit-the-Frog-air-bubble-need-to-clear-his-throat-voice) I’ve got you, Ali. I’ve got your heart.
Ali: (winded and more worried about the stalker-determination in his eyes than the hungry sharks) Thank you, Kacey.
Kacey: Here, sit down. (hovers as she sits criss-cross-applesauce on the blanket he’s laid out, then sits right next to her) I made you something. (takes a note of his pocket and hands it to her)
Ali: (opens note and reads aloud) ‘Ali, I’m the one who’s going to guard and protect your heart. Do you like me? Check Yes or No.’ Gee, Kacey, that drawing of a shield and rose are real pretty.
Kacey: Thanks. I tattooed that design along with a stenciled picture of your face to my backside. Want to see? (starts to move, she stops him)
Ali: That’s all right Kacey, there are more important things I need to know like if you’re genuine.
Kacey: Well I’m going to guard and protect your heart. If that’s not genuine I don’t know what is.
Ali: Well we just met so–
Kacey: You deserve someone who will guard and protect your heart. And I will be the one to guard and protect your heart. You deserve–
Ali: I got it! I got it…Where’s a hot pro athlete who looks good and keeps his mouth shut when you need one?

Jonathan: Temperature just warmed up 10 degrees up here.
Kacey: (rubs backside where ink from fake tattoo drips south)
Ali: That was wonderful Roberto!
Roberto: Thanks. I’ve been practicing since our Broadway date.
Ali: I don’t know a single thing about you but it doesn’t matter. You’re cute and not crazy, and right now that’s all that matters to me.
Roberto: Want me to show you how to throw a curve ball?
Ali: After just talking about not being crazy, sure, I’d love a curve ball! It’s cold and windy, and there’s hardly enough room to stand up here with the three of you but sure! This seems natural and not forced at all!

(Roberto pulls baseball from leotard–no need to mention from where. He tosses it to her. She drops it. Kacey rushes to pick it up and hands it to her.)
Jonathan: You should throw a couple degrees to the right, Ali, to account for wind velocity.
Ali: Thanks for looking out, guys. (Tosses ball back to Roberto.)

(Rated Rude Justin Rego finally gimps up final stair and snatches the ball mid-air. His crutches fall to the floor.)

Justin: Why don’t you let me show you how a real man wins over a woman? (He climbs back down the flight of stairs and back up again.) See? I’d climb a mountain for you, Ali.
Ali: But that was just a staircase.
Justin: But I’m on crutches and that makes it more meaningful.
Ali: You’re right. I’m here to find a husband and that shows me how qualified you are. How do I know you’re here for the right reasons?
Justin: (opens shirt, showing “Rated R”, and growls as only pro pathetic wrestlers know how) I’m here for the right reasons, Ali. I care about you more than any other. You have to believe me.

(Ali smiles despite herself and feels the first rumblings of an earthquake. She grips the railing and watches the men scramble while a 6.0 rocks the faultline hovering bridge. Roberto jumps onto the cable swinging to and fro, wraps his legs around and lets out a tarzan-y, yet very Brooklyn-sounding battle cry. Jonathan searches the clouds for answers, finds none, and sucks his thumb. Justin jerks his cell phone out of his pocket and dials frantically.)

Justin: (into phone) I’m so sorry! I came here for all the wrong reasons! I care about you more than any other! You have to believe me! Sarah! Jessica! Emily! Katrina! Which one are you again?

Ali: (eyes bugging out even more, thinks back to what he said) Wait a minute! You just said all that to me! The guys in the house were right! How is that possible? They lived with you for 3 weeks and I knew you for…well…for a couple hours when you were on your best behavior! How could I have been wrong about you?!?

Kacey: (runs to Ali, falls on his face, scrambles to his feet. He grips her around the waist, and guides her down the staircase by shoving her in front of him.) I’ll protect you Ali! I’m here to guard and protect your heart! I’m sincere and genuine and I’ll prove it! I’ll protect you because even though we just met your heart deserves to be protected!
Ali: Kacey no! (trips on stair, falls flat on lower platform)

Conan O’Brien: (comes to rescue, kneels beside Ali) Who?!? Who would do this to you, Ali? Who? Tell me who!
Jonathan: (takes thumb out of mouth and looks to Ali and Conan who are snuggled into an embrace) The future just got a whole lot foggier.