Many people see the Golden Gate for what it is. A stretch of beautiful bridge that spans San Francisco Bay. A landmark that’s often blanketed in curtains of fog. 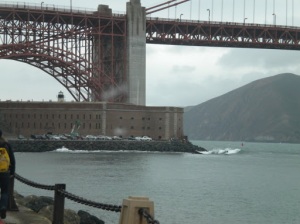 The fortress stood strong, protecting San Francisco harbor from attack during the Civil War. (As it turns out, Confederate ships were on their way into SF Bay, ready to attack the Fort and control the west, when they discovered the war had ended. Only a few weeks earlier and there might’ve been a battle between the South and the West!) During World War II, Fort Point was used to keep a watchful eye on the anti-submarine net that stretched across the mouth of the bay and back.

Now, it’s a National Historic Site. An awesome one. It also happens to be the scene for my kick-ass climax of my work-in-progress. I researched the heck out of the place online. I tapped into every resource I could find. (Mainly Google, Wikipedia, and the Fort Point site itself.) But for some reason, my vision fell short.

I didn’t just want to know about the Fort. I wanted to see it with my own eyes. I wanted to feel it. The fading brick and mortar walls. The dusty stone floor. I wanted to know if chills would creep up my neck when I descended down one of the three steep (and very dark) staircases. I wanted to feel that unforgiving San Francisco wind bite at my face when I traipsed along the roof.

And boy, did I get what I asked for. All that, and then some. 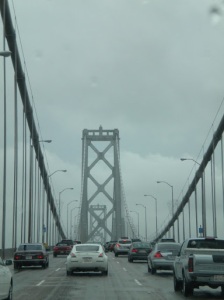 *The drive over the Bay Bridge

*Can you see Fort Point? It’s the tiny building under the Golden Gate on the left. 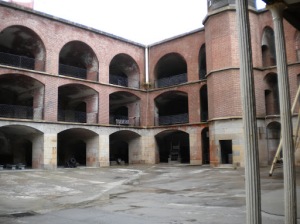 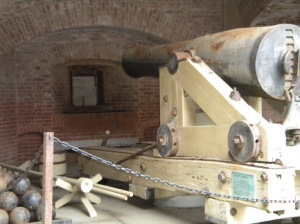 *One of the MANY cannons.

*And me again, conquering a stack of 128-lb cannon balls. These deadly puppies could skip over the ocean waves and blast through the hull of a ship from a whopping two miles away!

*One of those creepy hallways I knew was there. My camera lit up the halls pretty good, but in reality they were DARK. Such good material. I’m gonna use the heck out of every spooky nook and cranny.

*View of the light tower from the roof. It was SO COLD. I couldn’t stay up there longer than about five minutes. I can’t imagine what it would be like in winter…at night.

Overall, I’m glad I went. My huge climactic battle scene is going to have so much more dimension than it would have before. It’s one thing to read about Fort Point’s haunts online…it’s something else entirely to experience it first hand.

**Side note: Don’t forget Sophie Littlefield’s book giveaway ends tomorrow. I’m going to choose a winner randomly from the people who commented on that specific Author Spotlight post. If you’re interested in entering, you can find information on the giveaway under “Labels” and “Sophie Littlefield” or “Pararomance Contests”.

9 comments on “Research, Fort Point, and a Giveaway Reminder!”