Early this morning marked the 99 year anniversary of the sinking of the R.M.S. Titanic. It sank at 2:20am in the North Atlantic after striking an iceberg at 11:40pm the night prior. I’ve collected Titanic memorabilia since I was twelve years old. I’m a little obsessed. There’s just something about it that screams FATE. Some things in this world are meant to happen. Other things are meant to fall apart. If you’d like to read a post on all the things that led to Titanic’s demise go here. (It’s my post from last year.)

As I was going through my Titanic books this morning (always do this time of year), I opened up a 1905 Old Scrap Book titled Heart Throbs. Here I am, holding it against my heart:

I tell you what…every time I read this book I find more things I love about it. It has my favorite quotes. My favorite Bible verses. My favorite poems. All bound into one really old book. It smells good too, but I won’t show you the picture of me smelling it.

Anyhow, as I was digging through it a bit today, I was thinking about the Titanic, about the anniversary of it sinking, how far the Titanic Historical Society has come, preserving artifacts from the site and educating the world about the tragedy and found this:

“‘Tis written that the serving angels stand
Beside God’s throne, ten myriads on each hand,
Waiting, with wings outstretched and watchful eyes,
To do their Master’s heavenly embassies.
Quicker than thought His high commands they read,
Swifter than light to execute them speed,
Bearing the word of power from star to star–
Some hither and some thither, near and far.
And unto these naught is too high or low,
Too mean or mighty, if He wills it so;
Neither is any creature, great or small,
Beyond His pity, which embraceth all,
Because His eye beholdeth all which are,
Sees without search, and cometh without care;
Nor any ocean rolls so vast that He
Forgets one wave of all that restless sea.”
–Edwin Arnold 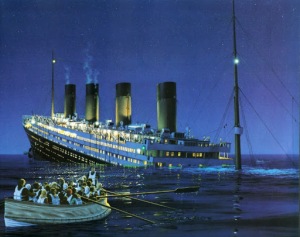 Isn’t the poem just beautiful? And the sinking no less awe inspiring, in the most heart-wrenchingly tragic way.

Take some time today to remember the Titanic and all that the terrible tragedy has taught us. Don’t challenge God. Don’t tempt fate. And most of all, never think that man can create something that mother nature can’t bring down with a flick of her finger.